Sleep Stages Explained: How Your Brain Works at Night

Sleep is a mysterious phenomenon.

It helps us rest and restore, but there’s still a lot going on when we sleep.

Aren’t you curious to learn what happens exactly? Do you know what sleep stages your body goes through every night?

I bet you will be surprised. Let’s dive right in!

You probably realize how complicated humans are. I mean, a human organism is a complex system. However, it doesn’t mean it works randomly and chaotically. Our bodies work in a special rhythm, following a certain routine over and over again.

It is the same with sleep. Every time we are in the arms of Morpheus, our brain and body go through the same cycle of sleep stages.

Now, you may be wondering “How many stages of sleep are there? Don’t we just… fall asleep and that’s it?” No, sleep is a complex process, and it involves 5 different stages. The first four stages of sleep belong to the non-REM group, and the fifth one is the REM sleep stage. 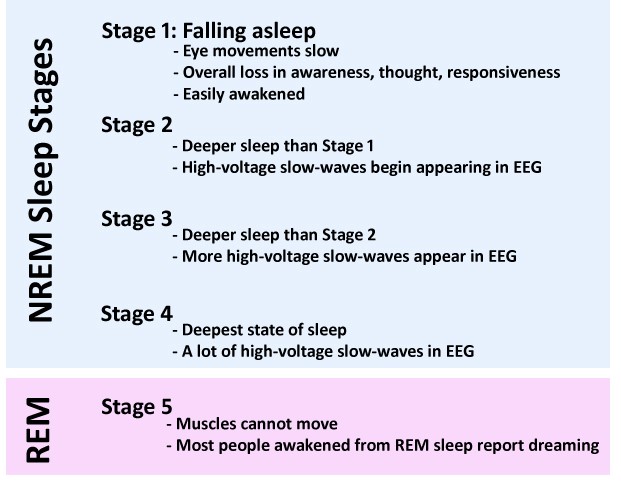 Let’s take a closer look at all of them, starting with the non-REM group:

Now, moving on to Stage 5 – the REM sleep stage, or the Rapid Eye Movement. This stage is also called paradoxical sleep or active sleep because of the characteristic brain waves during the stage. You see, they are remarkably similar to the brain waves of the awake state. During this stage, a sleeper’s eyes start moving from side to side, which, again, can serve as an indicator of the intense brain activity.

Interestingly enough, the REM stage usually lasts for some time, and then the cycle goes back to the non-REM stages, skipping the first one and jumping to the second stage of the light sleep. However, the duration of the REM stage can vary for each cycle. The first time a person enters the REM stage during sleep, it can last for even a minute, while during each next cycle, the longevity of the stage may increase.

A sleep cycle is basically a period of going through all the sleep stages. You start with the light sleep (Stage 1) and move through the rest (as described above). That’s your sleep cycle.

Typically, one cycle lasts for around 90 minutes. Once it’s over, you go back to the light sleep and everything repeats. Thus, we go through multiple sleep cycles during the night.

“Our brain goes through four different types of brain waves: delta, theta, alpha, and beta. Each type represents a certain speed of the electrical voltages in the brain. The delta type is the slowest one, and it is present during the deep sleep stage.”

Interestingly enough, we spend different amounts of time in each stage depending on the sleep cycle. You see, on average, we can go through 4-6 sleep cycles during the night. For the first 2-3 cycles, our brain spends the majority of the time in the deep non-REM sleep (Stages 3 and 4). However, during the last 2-3 cycles, we spend more time in the REM stage. Amazing, right? This only proves how complex sleep is!

Why REM Sleep Is Important

Look, you must already know that we don’t understand all the aspects concerning sleep. It is complex and we need more time and research to know everything about this phenomenon. So, we cannot say for sure whether REM sleep is actually that important. However, some theories exist, and they sound very convincing:

“REM sleep is often referred to as the paradoxical sleep. Why? Because our brain and body behave rather contradictory during this stage. While the brain is very active (just like some other body systems), the muscles get more and more relaxed, eventually becoming immobilized.”

Now, I came across a few studies saying that listening to classical music before sleep makes for prolonged REM sleep and, hence, better sleep overall. I got excited about the experiments and decided to have my own.

So, today is the 27th day since I started turning on some soothing classical melodies before going to sleep, and here’s what I’ve got:

I have no equipment to see how it affects my brain activity, but I do feel now more rested in the morning than I did feel a month before. Yes, I might have simply programmed myself by autosuggestion, but I think I’m still going to continue listening to music before sleep. Perhaps, the secret is that it reminds me of how my mother used to tell bedtime stories to soothe me to sleep when I was little.

Stages of Sleep and Dreaming

Now, you may be wondering “What about dreaming? When do we dream? Each sleep stage isn’t that long, so when do we actually experience those long, vivid, and sometimes awfully realistic dreams?”

In the majority of cases, this happens during the REM stage. This is quite logical, actually. REM sleep is when our brain is the most active, which means it is able to “produce” all those dreams. In fact, because the REM stage repeats itself throughout the sleep, we can dream multiple times a night. What feels like a long, weird dream in the morning is often just a mess made from pieces of all those multiple dreams we had throughout the entire night.

“We usually perceive sleep as a rather passive process. However, it is known that our brain remains active. That’s why sleep plays a huge role in many brain processes, including the cleanup and memory consolidation.”

Believe it or not, studies say that all people dream. Still, not everyone remembers their dreams.

During the REM stage, our muscles cannot move. Some scientists believe that this is our body’s way to protect us from injuries we can cause by moving and trying to act out the dreams we see in REM sleep.

But why do we dream, you may ask? As sleep science is relatively young, we don’t know much about it, so dreaming is still quite mysterious. But there are some interesting theories, including:

Which of these theories do you support? Do you remember your dreams? Feel free to share your thoughts about sleep and its stages in the comments below!

JOIN US FOR THE REVIEWS
AND monthly giveaways!
*We hate spam as much as you do! 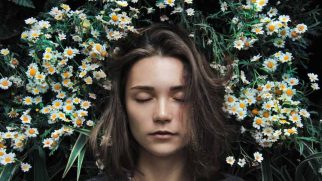 How to Touch Someone in Their Sleep Without Waking Them Up? 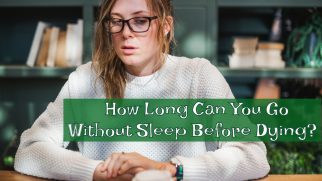 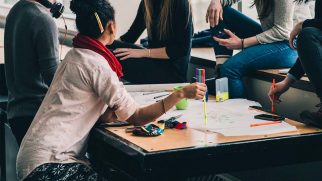 A Comprehensive Guide to Co-Sleeping With Your Dog 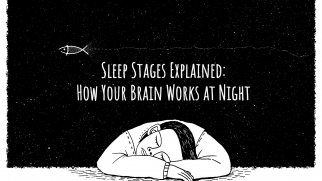 5 Ways to Get Better Sleep in a Noisy City Apartment